If you’re a cyclist with £80 to spend on something to improve your riding experience, what can you spend it on? A new rear mech? Ceramic BB? A nice, light, colourful set of skewers? Titanium railed saddle? The list goes on.

So why would you choose to splash your cash on something to put inside your shoes that no one ever sees? 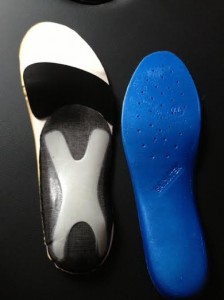 Well, the human foot is a clever and complex thing. But one thing those 26 bones were never meant to do was to be strapped into a carbon soled shoes and force a pair of pedals round and round for hours on end.

They’ll do it, that much is undeniable. Whether they’re doing it efficiently is another matter.

Every ounce of energy you transmit to the pedals goes through your foot. In almost every case, your foot will deal with those forces better if it has some support. That translates to stability, comfort, a better pedal stroke, less risk of injury and quite possibly a bit of extra power.

Now, take the insoles out of your shoes and have a look; how much support do they give? Some will be better than others – and some very, very expensive shoes will have nothing but a fag-paper thin bit of foam in there – but even the finest generic product will struggle to offer the same advantage as something that perfectly mirrors your foot.

A custom made footbed might not be an obvious upgrade, but it is one that will make a day to day difference to your riding.

Someone asked me this week what system we use for fitting. The thing is, I’m not sure we use a system, at least not in the sense that I interpreted the question.

Method? Yes. Protocol? Check. System? Er, no. There is always going to be more to fitting a rider to a bike than a bunch of number crunching that gives you a magic-bullet solution.

You can take as many measurements as you like, how you like – joint angles, power, motion capture, pressue mapping – but no matter what technology you deploy, the skill is still interpreting the information and relating it to the rider.

A bike fit is a jigsaw, but a complex one where putting one piece in place can disturb another already laid. What works for one rider is unlikely to work for the next or the one after that; there are too many variables to make the process so prescriptive.

Fitting remains a fine mix of art and science; a two-way process between fitter and rider. Look at the rider, listen to the rider and ultimately find a solution you’re both satisfied with.

I’ll be honest; years ago I used to buy my pedals based on one thing: Price.

At the time, that meant a succession of the old Look Deltas adorned my bikes and, in fairness to a design that showed plenty of longevity, they did an okay job. It was only later, when I decided that just ‘okay’ might not be enough for me, that I really inspected the alternatives. And that was the start of a fairly steep learning curve about the importance of pedal choice in the search for the optimum bike fit.

Picking the right one, either by accident or design, can put you in that happy place where everything fits together seamlessly; perfect cleat position, just the right amount of float and a natural alignment of ankles, knees and hips. On the flip side, picking the wrong one can make all those things frustratingly difficult to tune in and, potentially, lead to issues with both injury and performance.

The odd thing is that people can ride around for years, not actually knowing whether they’ve got it right or wrong, which, I guess, is one of the potential benefits of getting a bike fit.

Shameless fitting sales pitches aside, all of the major road pedal systems – Shimano’s SPD SL, Look’s Keo or Speedplay’s Zero – have pluses and minuses and some will suit some riders better than others. From a fitting and fitter’s perspective though, there is a winner: Speedplay.

Near-infinite and precise adjustability, different axle lengths and the ability to correctly position the cleat on virtually any combination of foot and shoe make it a natural recommendation. If nine out of 10 cats prefer Whiskers, I reckon a rummage through the bike collections of the nation’s fitters would reveal more than the odd pair of Speedplay.

Unless the cheque’s in the post, I’m not deriving any benefit from saying that – and there are downsides, mainly cost of pedal and cleat and an even more pronounced ‘duck walk’ than normal, if that bothers you – but the good outweighs the bad, for me at least.

Now I’m not telling everyone to go and buy a pair. But I would say check you’ve got a pedal that suits you, because it really can make a difference.