It is hard to imagine as I write this – there’s an inch-thick layer of ice outside the front door – but spring will soon be here. Hopefully.

And by late February or early March, the early season time trials, road races, triathlons and sportives will be popping up on the calendar.

So, if those are your targets – and the New Year training load is about to ramp up in anticipation – it makes sense for the rest of your preparation to keep pace too. 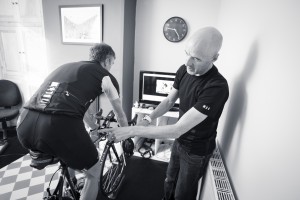 In bike fit terms, ideally that means making any potential changes now, rather than leaving it until later in the season.

You can make mid-year alterations to your position – and I see plenty of riders through the summer months – but there are downsides.

In well conditioned athletes there is inevitably a period of adaptation after a fit, especially if significant adjustments have resulted; the body takes time to adjust to new demands.

And to give yourself the best chance to make those adaptations, it is better if they are done during training rather than competition.

Asking your body to deal with a different bar height, cleat position, reach or a pair of new footbeds while riding full gas intervals is not ideal.

It can be done, of course, but, logically, it is not optimal. It might even be damaging.

Which brings me back to a point I’ve made before: Why compromise? Why leave a stone unturned in the search for performance gains?

If you’ve already picked up those carbon tubulars and ticked the boxes on the coaching and training fronts, it makes sense to check your position on the bike.

And the best time to do that is probably now.